Ly Tong in a parade in Miami in 2000, after scattering anti-Communist leaflets over Havana. Months later, he did the same in his native Vietnam.Robert Nickelsberg/Liason, via Getty Images 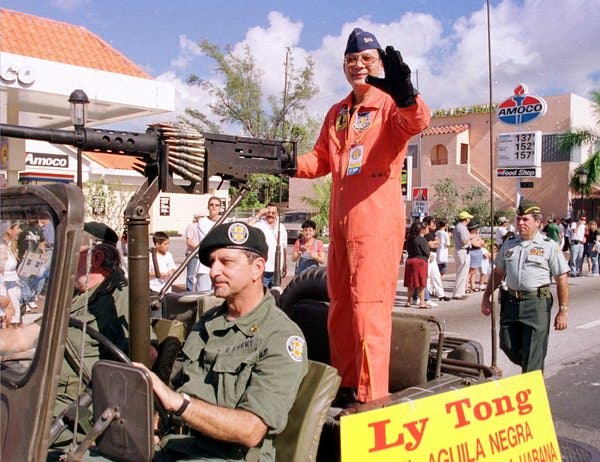 BANGKOK — Ly Tong, a South Vietnamese Air Force veteran who dropped anti-Communist leaflets over Vietnam from hijacked planes long after the war’s end, playing out the fantasies of many defeated soldiers of the south, died on Saturday in San Diego. He was 74.

His family said the cause of death was lung disease.

A man who never accepted defeat, Mr. Ly Tong considered it his personal mission to take back his country from the Communists, who have ruled it since winning the Vietnam War in 1975.

“I have the duty to liberate my country!” he exclaimed in an interview more than 30 years later. “You cannot enjoy yourself when your whole country is in pain, in torture.”

Mr. Ly Tong became a hero to many Vietnamese refugees in 1992, when he hijacked a commercial airliner after takeoff from Bangkok, ordered the pilot to fly low over Ho Chi Minh City — known as Saigon, South Vietnam’s capital, before the Communist victory — and dumped thousands of leaflets calling for a popular uprising.

He then strapped on a parachute and followed the leaflets down to certain capture. He was released six years later in an amnesty and returned to the United States, where he had become a citizen after the war.

In 2000, under the guise of taking flying lessons in Thailand, Mr. Ly Tong made a second trip over Ho Chi Minh City, sending down a new cascade of leaflets, which he had signed “Global Alliance for the Total Uprising Against Communists.”

He was arrested on his return to Thailand and spent six years in prison for hijacking. He was not armed, and no one was hurt on either of his flights.

“The only thing that matters is the Communists still control my country,” he shouted through a double screen of wire mesh during an interview at Bangkok’s central jail. “I’m a pilot. This is what I can do.”

He timed his second flight to coincide with President Bill Clinton’s historic visit to Vietnam, the first by an American president since the end of the war. Soon after Mr. Ly Tong scattered his leaflets, Mr. Clinton was in Hanoi, the capital, where he delivered a very different message: “The history we leave behind is painful and hard. We must not forget it, but we must not be controlled by it.”

As the years passed and a new generation of Vietnamese-Americans accepted the unsentimental facts of history, the veterans’ fantasies of liberation became relics of that distant war.

But at the end of his life, it became clear that the legend of Mr. Ly Tong — who proved time and again his loyalty to a country that no longer existed — still compelled devotion.

As word spread that his health was failing, visitors converged on his hospital room in San Diego — as many as 200 people on one recent weekend.

Mr. Ly Tong in 2006 in Bangkok, where he spent years in prison for hijacking. His postwar feats made him a hero to many of the defeated soldiers of South Vietnam.Sakchai Lalit/Associated Press 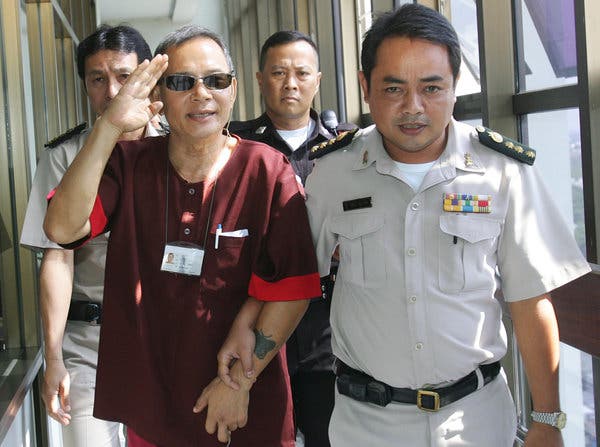 Mr. Ly Tong in 2006 in Bangkok, where he spent years in prison for hijacking. His postwar feats made him a hero to many of the defeated soldiers of South Vietnam.Sakchai Lalit/Associated Press

His most devoted followers were former soldiers like himself, liberated from years in Communist labor camps under an agreement with the United States and arriving by the tens of thousands in the 1990s, the last and saddest wave of refugees.

“They have come prepared to show the courage of the former soldiers of South Vietnam, but they are showing themselves only as a group of misfit people,” Yen Ngoc Do, who was then the editor of the Vietnamese-language newspaper Nguoi Viet, said in an interview. “Their political and military past has been totally forgotten.”

Broken in health and spirit, too old or tired to start over again, many of the veterans lapsed into listlessness and despair.

“I survived the war, I survived prison,” one of them, Phan Nhat Nam, a former paratrooper and wartime journalist, said in a 1995 interview in the Little Saigon area of Orange County, Calif.

“Now I must survive my freedom, and it is very hard,” he said. “We are old men now. We have lost the ability to adapt and renew.”

For people like these, Mr. Ly Tong offered an alternate reality — a vision of courage and action, a tragic hero in the tradition of Vietnamese history.

Ly Tong was born Le Van Tong on Sept. 1, 1945, in the central Vietnamese city of Hue, according to his family. (Other accounts have said that he was born in 1948.) He was the son of a well-to-do farmer who was executed as a revolutionary.

Mr. Ly Tong joined the South Vietnamese Air Force and served in its elite Black Eagle fighter squadron. As the war neared its end, he was shot down and sent to a re-education camp.

His postwar story began in 1980, with his escape and a 17-month trek to freedom through five countries. He picked his way through minefields, he said, broke out of jails, dodged security patrols and crawled through jungle to avoid border posts.

He was accepted as a refugee in the United States, where he worked as a security guard and earned a degree in political science from the University of New Orleans. He published a 300-page autobiography, “Black Eagle,” which made him a celebrity among overseas Vietnamese.

In early 2000, years after his first flight over Ho Chi Minh City, Mr. Ly Tong burnished his anti-Communist credentials with a flight over Havana in a rented plane, scattering leaflets as he had in Vietnam. He was commended on his return by Cuban-Americans in Florida, who gave him a victory parade. His second foray into Vietnam came later that year.

In his final and most bizarre act of defiance, in 2010 in California, Mr. Ly Tong assaulted a Vietnamese singer whom he deemed sympathetic to the government of Vietnam. Disguised as a woman, he walked to the edge of the stage, reached up as if to hand the singer a bouquet and squirted a liquid, which may have been pepper spray, in her face. He was sentenced on multiple charges to six months in jail and three years’ probation. He appeared at his trial in drag.

Mr. Ly Tong lived out his final years quietly in San Diego. He is survived by a half brother, a half sister, three daughters and several nieces and nephews.